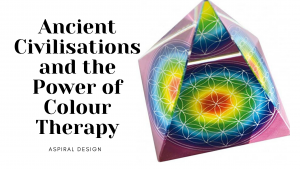 Ancient Civilisations and the Power of Colour Therapy

What colours improve your mood?

In fact science has repeatedly shown how colour can influence mood, affect your emotions and improve your overall health.

It’s easy to think these findings are modern, but colour therapy – also known as chromotherapy – stretches back thousands of years. Many different civilisations throughout history experimented with colour therapy, from ancient Egypt right up until modern times.

Get ready for a brief history lesson with a splash of colour.

Read on to learn more about the ancient healing powers of colour therapy.

According to ancient Egyptian mythology, colour therapy was founded by the God Thoth.

As the ancient Egyptians worshipped the sun, they believed shining the rays of the sun through coloured crystals would penetrate the body in specific locations and heal ailments. As colour is just light of varying wavelengths, each colour has its own frequency – so they were ahead of their time.

Based on this knowledge the Egyptians built temples dedicated entirely to healing through light, with different rooms dedicated to the healing powers of different colours.

There is evidence of ancient Egyptian colour therapy stretching back to 1550 BCE in the form of ‘colour cures’ listed on papyrus, which makes the Egyptians the forefathers of today’s modern colour therapy practice.

Move over pyramids, ancient Egypt has a new claim to fame.

Similar to the ancient Egyptians, the ancient Greeks built temples devoted to colour therapy. These were built for healing purposes also, with sunlight shining through colour components to create individual colour light treatments.

More than a fringe therapy, many of ancient Greece’s brightest minds spent time unlocking the healing powers of colour.

Philosopher Aristotle conducted some of the earliest studies of colour therapy, discovering that two colours mixed together could create a third colour – using a piece of yellow glass and a piece of blue glass he created green.

While ancient Greek physician, Hippocrates, built on Aristotle’s findings and noted the link between health and colour. That’s a few thousand years of research already!

Ancient Indian sculptures, such as Atharvana Veda, show the use of colour therapy in yet another ancient civilisation.

As well as harnessing light through crystals, the ancient Indian’s practised the tradition of ‘Ayurveda’ or the science of light. This practice combined the healing powers of light (which refract to create colour) with elements of taste (sweet, salty, sour, pungent and astringent).

Instead of using the colours to heal externally, ancient Indian civilisations believed colours could be used to penetrate the body and remove blockages to internal energy centres – known as chakras.

The future of colour therapy

You can choose any colour of clothing you like, and decorate your life with the colors that make you happy and healthy. For ancient civilisations this wasn’t always the case, which makes their use of light and colour all the more creative and incredible.

It’s easy to think modern forms of colour therapy have come from Western science over the past decades – but the truth is much more ancient.

Colour therapy grew out of ancient practices common to many cultures spread across the world. Just as past civilisations recognised the healing power of colour, our modern society can benefit from the natural healing powers around us too.

Are you looking to tap into the health and wellness powers of colour therapy?

Discover the next Tie Dye Workshop or Colour Therapy Workshop on the Gold Coast near you.